Earlier this week, the U.S. Federal Reserve released probably the best data yet available on the use of cryptocurrency among people in the United States. For the first time, the annual Survey of Household Economics and Decisionmaking included questions on cryptocurrency.

Wisely, the designers of the survey distinguished between three different ways to use cryptocurrency. The survey asked:

In the past year, have you done the following with cryptocurrency, such as Bitcoin or Ethereum?

I’ll focus on “Used to buy something or make a payment” since that best represents the concept of people using cryptocurrency to replace electronic banking rather than using it as a speculative investment. Only about 2 percent of survey respondents said “yes” to this question, but since the survey collected data from about 10,000 people, the sample size is large enough to carry out an in-depth analysis.

The true power of this data comes from the extensive list of questions that survey respondents were asked. We can go much further than just tallying up the number of cryptocurrency users because the Federal Reserve released the survey microdata, i.e. data on the responses of each survey respondent to each question.

Below is a visualization of a correlation matrix between several key variables in the dataset: 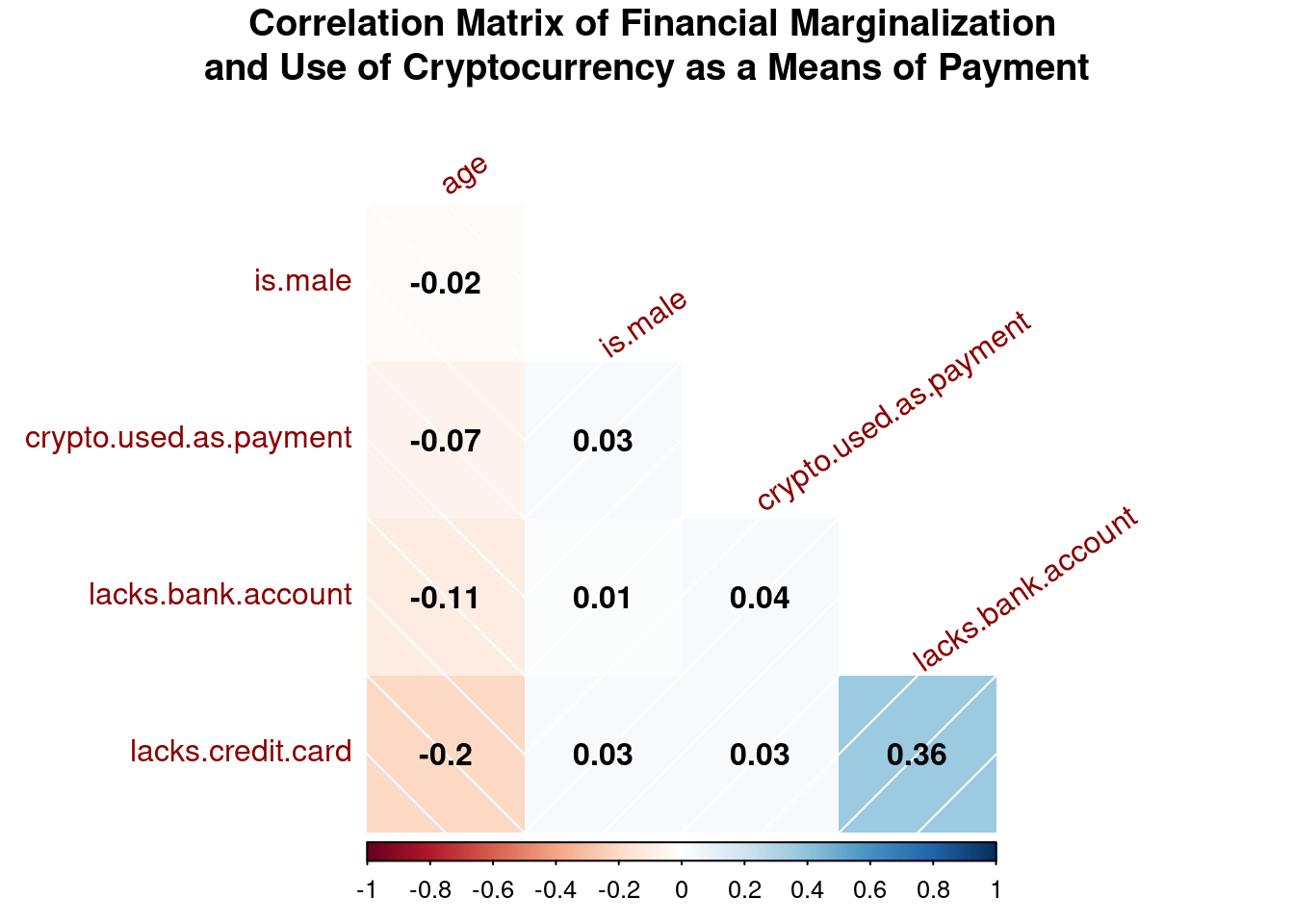 To isolate the relationship between using cryptocurrency as payment and financial marginalization, I used a logit regression and put age and gender in the same statistical equation.

Other measures of financial marginalization tell the same story. Being rejected for credit, purchasing a money order from a non-bank source, cashing a check at someplace other than a bank, taking a payday loan, taking a pawn shop or auto title loan, experiencing discrimination in banking or a loan application, and getting a tax refund advance are all positively associated with using cryptocurrency as a means of payment. In fact, many of these measures have a stronger relationship with using cryptocurrency as payment than lacking a bank account does. For instance, people who report experiencing discrimination in banking or applying for a loan have 618 percent greater odds of using cryptocurrency as a means of payment.

Given that 2021 was the first year that the cryptocurrency questions were asked in this survey, we may be concerned with data quality. After all, survey respondents could have decided to respond randomly to these questions. One way to calibrate confidence in the data quality is to see if relationships that we observe in the world around us are present in the data. I checked subject matter of educational degree and willingness to take risks, which in the real world are most likely correlated with use of cryptocurrency as a means of payment. The results say that Computer Science is the only degree that is statistically significant in its relationship with use of cryptocurrency as payment. Higher willingness to take risks is strongly associated with use of cryptocurrency as payment. The data passes these basic quality checks.

What about statistics in the aggregate? Do the total report number of cryptocurrency users align with other data? Corroborating data on people using cryptocurrency as a means of payment is hard to obtain, but data on using cryptocurrency as an investment is available from centralized exchanges. The Survey of Household Economics and Decisionmaking indicated that about 11 percent of adults in the U.S. bought or held cryptocurrency as an investment, or about 29 million people. As a publicly-traded company, Coinbase must accurately report its user numbers. In its most recent annual report to shareholders, Coinbase said it had 89 million verified users in 2021. Coinbase does not report its user numbers by country, but it does separate revenue by geographic location. About 80% of its revenue came from the United States. Granted, revenue per user is likely higher in the U.S. than in the rest of the world. Nevertheless, these numbers from Coinbase alone suggest that the data from the Survey of Household Economics and Decisionmaking about cryptocurrency use is not a gross overestimate.

Frankly, the results surprised me. Using cryptocurrency to “bank the unbanked” has always seemed like a nice aspirational slogan that may eventually become a reality if the stars align, but these statistical results suggest that it’s starting to become a reality right now. Even the Federal Reserve noticed in its report on the survey results, stating: “those using cryptocurrencies for purchases rather than as investments frequently lacked traditional bank and credit card accounts.” (The Federal Reserve’s figures did not attempt to correct for omitted variable bias or dive deeper into other factors at play like my analysis has done.)

These results for unbanked people in the United States are in contrast to those of a recent working paper (Alvarez, Argente & Van Patten 2022) that carried out a survey in El Salvador and found that “usage of bitcoin for everyday transactions is low and is concentrated among the banked, educated, young, and male population.” The unbanked in the United States likely have greater access to the internet than the unbanked in El Salvador.

These results are also surprising given that one of the easiest ways to obtain cryptocurrency in the United States is through a bank account or credit card linked to a centralized exchange like Coinbase. People who lacked bank accounts but used cryptocurrency as a means of exchange may have obtained cryptocurrency through alternative means such as CashApp, PayPal, or in an entirely peer-to-peer manner.

The code to reproduce the analysis is here. The full statistical results are here. The data from the Federal Reserve is here (note that this is a .gov website).